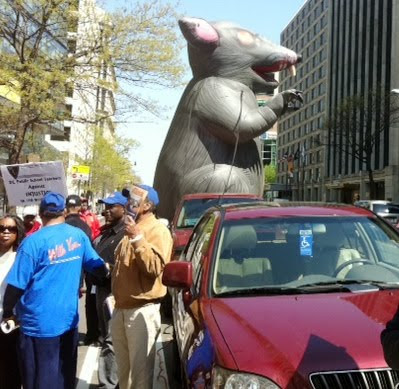 
Approximately 300 teachers, school personnel, city workers, union and community members protested outside The Washington Post building on Friday, April 15. This day was selected because it coincided with a day-off furlough for DCPS employees and DC government workers. The protest was organized by the Washington Teachers' Union (WTU) against the Post due to their biased reporting that consistently vilifies teachers and fails to include more balanced reporting of the obstacles teachers face in a mostly urban school district. According to WTU President, Nathan Saunders, "You've got to understand that the Washington Post has been vicious against, not just teachers unions, but the Washington Teachers' Union in particular, for the last three or four years. And everything that the former chancellor, Michelle Rhee, has done in the District, they have embraced wholeheartedly at the expense of working teachers."

Urban Teacher blogger and a former DC teacher questioned, "Why is the Post such an awful place for citizens to get information about what's really going on with education in the District?" We also have to wonder, why did it take USA Today newspaper's investigative journalists, Jack Gillum and Marisol Bello to cover the story: "When Standardized Test Scores Soared in DC Were the Gains Real?" This story appeared in USA Today's newspaper on March 11, 2011 and found that cheating likely occurred during the Rhee/Henderson administration during 2008-2010. It begs the question where was the Washington Post?
Another reason for Friday's protest was to call attention to the Washington Post's relationship with Kaplan Higher Education which accounts for the majority of the Post's revenues which comes from standardized testing. It is the position of the WTU, that the Post fails to adequately cover education reform from all vantage points, fails to print letters to the editor from education stakeholders, colors their editorial viewpoint and heaped undeserving praise on former Chancellor Michelle Rhee during her term as Chancellor, despite her many transgressions.

All in all, it was a beautiful day and just the start of actions planned by the Washington Teachers' Union which will build momentum and seek to convince our government and Mayor of the need to provide adequate funding for public education in the District. 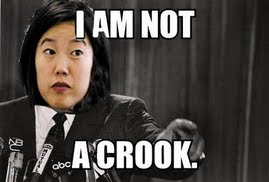 Let’s take a trip down memory lane. Remember back in 2008, OSSE (Office of the State Superintendent of Education in DC) requested that McGraw Hill Testing Company conduct an erasure analysis due to abnormally high (statistically improbable) proficiency rates on standardized tests conducted in Washington, DC during April 2008? This computerized analysis revealed some disturbing results that occurred when103 public schools in the District of Columbia and some charter schools were flagged for having statistically high rates of wrong answers that were erased and replaced by correct answers on standardized tests during years 2008 to 2010. Deborah Gist, former DC State Superintendent of Education, recommended an investigation into why DC Public Schools (DCPS) erasure rates were so high but her recommendation to investigate met a roadblock by the Rhee/Henderson administration. USA Today's – through the use of Freedom Of Information Access (FOIA) requests uncovered a five month exchange of memos from DCPS officials questioning the rationale for a further investigation at the time. (click link to see memos, emails and tables).
Fast forward to year 2011, when USA TODAY'S newspaper and their cast of thirteen staff writers conducted their own investigative probe into the extraordinarily high erasures on standardized tests in the District of Columbia Public Schools. This piece found that DCPS likely cheated under the Rhee/Henderson administration. Even when these findings came to light and a recommendation was proffered by Gist to investigate further, Michelle Rhee along with Deputy Mayor of Education, Victor Reinoso and Kerri Briggs – successor to Deborah Gist in 2008 - refused to investigate and swept its dirty little secret under the rug.
Again in 2009, there was a second round of questionable proficiency rates on standardized tests in DC Public Schools. The USA TODAY investigation revealed that 46 DC public schools were flagged for having high erasure rates of wrong answers corrected to right ones. Caveon Consulting Services eventually conducted limited investigations in 2009 into the process and training of eight DC public schools at the request of DCPS. However, DCPS did not request that Caveon Consulting Services conduct a data analysis of the questionable testing data.
Given that three years have now passed since the questionable results were first released, one has to wonder why Mayor Gray and other government officials aren’t irate and calling for an intensive federal investigation to determine if fraud occurred like the federal probe conducted by the state of Georgia in 2010 by the Georgia Bureau of Investigation. A USA TODAY article reported that “… only 4% of Georgia’s schools were considered of “severe concern” after their 2009 standardized tests,” according to Kathleen Mathers of the Georgia Governor’s Office of Student Achievement. In contrast, more than 15% of DC’s public schools had so many classrooms flagged in 2008 that they would have raised severe concern."
Former Georgia Governor Sonny Perdue (whose term ended in January 2011) ordered law enforcement to take over the Georgia investigation because he said he was dissatisfied with the failure of the districts in Atlanta and elsewhere to explain the erasures. Here in DC, It is important to note that a referral was only recently made by the Henderson administration to the DC Inspector General to investigate after the USA TODAY's newspaper investigation featured a number of articles on DC Public Schools' questionable testing gains at schools like Noyes Elementary School (Former Principal Wayne Ryan during 2001-10- now Instructional Superintendent for DCPS) and others. Even though Kwame Brown, Chairman of the DC City Council, announced that he would hold public hearings on high erasures, these hearings have now been cancelled.
Do DC politicians really care? Why aren’t government officials more alarmed? What are they afraid they will learn? Why were the DC City Council hearings cancelled? This scandal is full of many examples where unethical actions have had negative effects on the entire city of Washington, DC, our public schools, parents, community, school personnel and especially our students. The principles of accountability were sacrificed by Rhee’s administration. Besides obviously being disingenuous and dishonest, Rhee’s administration acted unethically.


In addition to calling for a federal probe, I wholeheartedly concur with Conducting the Inner Light, DC teacher turned blogger's assessment of the DCPS cheating scandal below: “Michelle Rhee’s reform has never been about the children. She used the district’s children to further her political ambitions. High test scores were necessary for her story and for advancing her agenda. If she didn’t collude in that cheating then she was certainly willfully negligent in her diligence to make sure those test scores were valid. If she were still the Chancellor of DCPS than it would be necessary for her to resign. As it is, Kaya Henderson and the rest of the Rhee team should resign or should be asked to resign by the mayor. Teachers had lost most of their trust in Rhee by the time she left. Most of us see Henderson as nothing more than Rhee’s factotum ...."

Isn't it time to clean house or will Mayor Gray allow Henderson to bring him down like Rhee did Fenty?