Forcing Out Effective Educators in DCPS Through Buyouts

By Candi Peterson
Forty three DC Public schools Educators out of fifty-five signed up to testify at the DC City Education Chairman, David Catania's Round table on Public Education held on Saturday, December 14, 2013 at McKinley Senior High. I was among those DC educators willing to endure the brisk cold wintry Saturday morning to express my perspective on public education and discuss ways to help our students succeed.
The title of the round table was "Setting Students up to Succeed" although many in attendance questioned the motives of Chairman Catania's as seeking to get a political leg up on other DC mayoral candidates using support of public education as  his platform.
I was glad that the Washington Teachers' Union (WTU) saw this event as an opportunity to elevate the voice of educators who as the inside experts can speak truth to power about what our students really need to succeed. WTU had panels of educators to bring testimony in a number of different areas including, budget and assessments, professional development, special education and teacher evaluations.
DCPS Chief of Human Capital, Jason Kamras was among those seated  in the McKinley auditorium and didn't escape the attention of some teachers who expressed concern about fear of reprisal for testifying. Before the start of the hearing, I mentioned the audiences comments to Mr. Catania and he gladly made an announcement that work place reprisal for participants testimony could constitute a misdemeanor and wouldn't be tolerated. Whatever the reason for Jason's appearance, I hope his note taking will find it's way back to DCPS  and be the impetus for much needed changes to this corporate model of education reform that sets our students up to fail.
Here's my testimony that I didn't get a chance to present in its entirety due to the strictly imposed two minute time limit on the afternoon panels.
12/14/13 - Testimony of Candi Peterson, WTU General Vice President
Panel # 2: Budget and Assessments (presented with Guy Brandenburg,/WTU retiree, Erich Martel/WTU retiree, Angela Thompson Murphy/Teacher Lasalle-Backus Education Campus
My name is Candi Peterson and I am the Washington Teachers Union (WTU) General Vice President. I have 21 years as a DCPS educator. In 2013, I was excessed from Cardozo High School due to a school restructuring . I had been unable to find another position and had it not been for my election to WTU, I most likely would have faced termination from DCPS  within the next school year, despite my Effective Impact evaluation rating.
Given that DCPS has one of the highest teacher turnover rates in the nation with 55 % of new teachers leaving in their first two years and 80% gone by their sixth year, I want to focus on the churning out of effective & highly effective educators who are pushed out through a process known as excessing. Turnover of our best teachers creates instability for our students and schools and negatively impacts student achievement.

Fix my Life is a reality TV series hosted by life coach, Iyanla Vanzant. This TV program focuses on offering solutions guests present. When it comes to teacher churn in DC public schools, we are desperately in need of an intervention like the one offered on the Fix My Life TV series. We need to stop the purging of effective and highly effective educators through excessing which by definition is "an elimination of a teachers position due to a decline in student enrollment, a reduction in the local school budget, a closing or consolidation, a restructuring or change in the local school program where such an elimination is not a reduction in force or abolishment."

When the WTU Collective Bargaining Agreement (CBA)  was negotiated in 2010, little did many of our teachers know that an excess under this contract would likely lead to their termination as there would no longer be a requirement for teachers to be placed. Under this contract if teachers are unable to secure a position within the 60 calendar days following their excess through mutual consent, if they are probationary teachers - they are terminated from the school system. What the general public isn't aware of is that our effective and highly effective educators are among the growing pool of candidates facing termination from DCPS. Under the WTU CBA, effective and highly effective educators with permanent status are offered a series of three options if they are unable to find another position following the 60 days after excess. These three options include a $25,000 cash buyout, an early retirement option to eligible teachers and a one year placement option.


Option 1 and option 3 involve financial incentives to push effective and highly effective teachers out of the school stem. Option 1 is a $25,000 cash buyout offered to these teachers unable to find another position and results in their termination. According to the DCPS Fiscal year 2012 WTU Teacher buyout document which was made available to the Council at the Oversight hearing indicates that 34 effective and/or highly effective teachers were terminated and offered buyouts totaling $835,000 to the school district.
A second costly option to the school district is the early retirement option. Under this option, DCPS funds a VEBA (Voluntary Employment Beneficiary Association) which is a trust that provides financial benefits to effective and highly effective teachers after being unable to secure a teaching position following an excess. Teachers who select this option must have 20 years of creditable service and an effective or highly effective rating. DCPS funds 1.7 million dollars yearly  beginning Fiscal year 2012 through Fiscal year 2018 totaling 11.9 million dollars. This option forces out teachers who would likely continue working until full retirement age.

What's wrong with this picture? Teacher buyouts force our best teachers out and are costly to the District of Columbia and hurts our students. They also add to the pool of teachers who leave voluntarily, thereby creating a revolving door workforce. If DCPS can find monies to buy teachers out, then surely they should be able to brainstorm ways to financially support our public schools and retain good teachers.

What we know from the research is that high teacher turnover harms students. In a study titled "How Teacher Turnover Harms Student Achievement" by Matthew Ronfeld, Susanna Loeb and James Wycoff presented at the National Center for Analysis of Longitudinal Data in Education Research in 2012 - teacher turnover has a negative effect on student achievement in both math and reading. This study reveals that it is particularly harmful to the achievement of students in schools with large populations of low performing and black students.

In the words of Diane Ravitch, "good school districts don't have high attrition rates among teachers and principals. Good schools are schools professionals feel a part of and want to sustain and improve. Churn is not good for teachers and by now we know, it's not good for students." No creditable school system seeks to dismantle its effective teaching workforce.

My recommendation is to develop a plan which focuses on minimizing high rates of teacher turnover. We need to retain effective and highly effective educators, and work to develop and support novice teachers who shouldn't be expected to be proficient from the start.

Our first step should be to create a task force to review teacher churn. Next steps should include requesting detailed data from DCPS on teacher turnover rates including requesting the exact numbers of all educators who leave voluntarily and involuntarily with statistical breakdowns by race, gender, ward, school, years of teaching experience, date of hire, salary level, and Impact rating scores. Without this data, we are operating in the blind and unable to develop valid hypothesis, in addition we must demand to know the costs to the school district of teacher buyouts dating back to FY 2011.

Thank you for the opportunity to testify before the Education Committee at this round table discussion.

WTU Panel to Participate in Education Roundtable on December 14

The DC City Council Committee on Education will hold a public oversight round table discussion; Setting Teachers Up for Success. The purpose of the round table, chaired by Council member David Catania is to hear from District of Columbia educators about their experience and perspective on the state of public education and how they and their students can be set up to succeed.  The discussion will be held this Saturday, December 14, 2013 from 10 am - 1 pm at McKinley Senior High school located at
151 T Street, NE.

Washington Teachers' Union (WTU)  has convened a panel of DCPS educators/WTU members to present testimony at tomorrow's round table. Our WTU panel includes:

Hope to see you there!
Posted by Candi Peterson at 4:36:00 PM No comments: 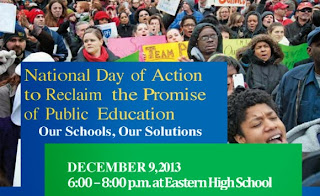 WTU and Empower DC have both committed to increase awareness and build momentum around education issues. At our town hall we will discuss the principles that unite us as well as, engage the mayoral candidates around issues concerning quality education. We ask that WTU members and others attend to help make the December 9th Day of Action a success.

Look forward to seeing you there!