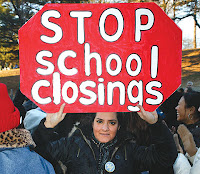 Let's take a trip down memory lane back to 2008 when Michelle Rhee was the Chancellor of the District of Columbia Public Schools. Rhee rolled out a plan to abruptly close 23 public schools. Her premise was that the closing of under enrolled public schools would save the taxpayers $23 million dollars and that these cost savings could be used to hire additional teachers and create new programs. Sound similar to Kaya Henderson's Consolidation and Reorganization Proposal to consolidate 20 schools?

At the 2008 school closure meetings, parents and education stakeholders voiced strong opposition of Rhee's plan since closures were proposed before the community had a chance to have input. Stakeholders were distrustful of school closures since a disproportionately higher number of minority neighborhoods faced school closures, leaving Ward 3 schools unscathed. And it seems that the politically well connected, upscale neighborhoods west of Rock Creek will be spared again!

Parents are now asking many similar questions of Chancellor Henderson regarding her proposal to consolidate 20 more public schools that they once asked of Rhee. Stakeholders want to determine: What data was used to determine school closures? What will happen to closed school buildings? How will school closures impact DC Public Schools enrollment? Will teachers from closing schools be able to follow their students to receiving schools? What will be the actual cost savings of school closures? How will the money be used?

In 2008, Mary Levy, then Attorney for the Washington Lawyers' Committee for Civil Rights and long time DCPS budget analyst  predicted that closing schools would not save the money Rhee projected (23 million)."If these 23 schools are closed, it isn't going to save us a lot of money and it's not going to allow us to do exciting new enrichment programs," Levy said.

By looking closely at some of the available data (DC City audit report, Mary Levy study, etc.) from the 2008 school closures, student enrollment declined considerably. Many dissatisfied parents pulled their children out of DC Public Schools and students were more than twice as likely to enroll in charter schools. The DC City audit reported in 2009 that the loss of enrollment of DC Public Schools cost the school system five million dollars. Mary Melchoir, a DCPS parent and 2nd VP of Ward 5 Council on Education recently testified at the DC City Council hearings on proposed 2013 school closures. Melchoir cited a graphic example of what happens when schools are closed. “The consolidation of Brookland/Bunker Hill elementary school resulted in the loss of 211 students who left DCPS resulting in the loss of 2.5 million dollars”, Melchoir stated.

Given what we have learned from the DCPS 2008 school closures, it is not surprising that parents, city residents and community groups are calling for a 'moratorium' on school closures this time around. Empower DC, a well respected community grassroots organization is leading the effort to halt school closures. Daniel del Pielago, organizer for Empower DC's public education campaign in a November newsletter wrote: "The Chancellor and Mayor have made up their minds so far that more schools need to be closed. The City Council while expressing concerns about this process has not expressed any tangible opposition to continued school closures."

I wholeheartedly agree with del Pielago's position that the chancellor has it wrong and needs to develop a comprehensive plan for public education. I thought we learned what not to do after the Michelle Rhee experiment of 2008. I guess somebody needs to tell Chancellor Henderson what the definition of insanity is: doing the same thing over and over and expecting different results.