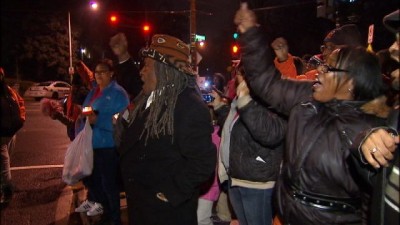 On a cold, rainy night (January 15)  an estimated 300 parents, students and concerned citizens took a page from Martin Luther King, Jr.’s social action playbook on his official birthday and took direct action by holding a vigil at the home of Mayor Vincent Gray, who chose to work late rather than meet with his neighbors.
Led by Ward 8 State Board of Education representative Trayon White, the animated group of parents and children pleaded for the opportunity to keep their neighborhood schools open. “Enough is enough! Instead of giving our children less in Ward 8 we should be giving our children more.”
Parents say it’s more than an inconvenience it’s a threat to their children’s future.
Chanting “Save Our Schools”, parents and activists were joined by a number of enthusiastic children from schools such as Malcolm X elementary as one particularly angry mother stated, “A lot of people don’t have transportation to get these kids back and forth to school. Is that what they are trying to do, they are trying to push us out. It’s not us that is suffering but our children.”
Kaya Henderson appears to be tone deaf to the concerns of the District’s poorest neighborhoods, as she released a statement saying, “As you will see DCPS will reinvest funds from consolidate schools to improve programming across the District. The goal is to use funds and resources more efficiently”.
Poor parents are particularly upset at the cavalier attitude that DCPS has to their desire to keep neighborhood schools open that are in walking distance of their home. In addition to the cost and the added burden of busing their children to schools outside the neighborhood, there are legitimate security concerns as Ward 8 has one of the highest crime rates in the city.
In addition to Malcolm X, two other elementary and one other middle school is a target for closure in Ward 8, and three other elementary schools and another middle school in nearby Ward 7, which represent half of the 20 schools slated for closure.
The irony of the bad timing of these schools closing during the week when the District commemorates the heritage of Martin Luther King, Jr., with a parade in the street named in his honor in Far Southeast, and the nation gears up to celebrate the inauguration of the President, the Chancellor plans to announce her school closing plan this week before a long holiday weekend.
Across the District the spirit of direct civic action is being renewed around the issue of public education. Leading up to the vigil at the Mayor’s residence was an education Summit on DC school closures, sponsored by EMPOWER DC this past Saturday at ward 5’s Guildfield Baptist church where a packed basement of activists participated in a social justice training session.
Those plans call for a similar vigil at the home of Chancellor Henderson this Thursday, and a protest at the Department of Education to meet with Education Secretary Arnie Duncan on January 29th where activists from across the country are expected to come to the Nation’s Capitol to protest policies that promote the privatization of public education.
Public school closures has finally become the galvanizing issue that has gotten the attention of a broad cross section of parents, educators and education policy activists into an effective coalition. 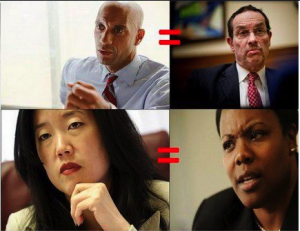 Ward 8 DC School Board Representative, Trayon White requests that parents, guardians, teachers, students and community members Please Stand With Him and attend a candlelight vigil at the home of DC Mayor Vincent Gray on Tuesday, January 15, 2013 in protest of DC Public Schools closures.

The Black and White of School Closures 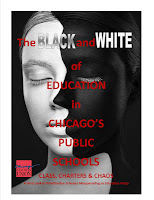 As 2012 comes to an end,  two unmistakable trends have emerged from studies that public schools are being sold down the river to private interests and the rush to close schools has not resulted in any measurable improvement in standardized test scores. The Chicago Teacher’s Union (CTU) just issued The Black and White of Education in Chicago’s Public Schools report on the “underutilization crisis” in the Chicago Public Schools system. CTU contends that this crisis that has been manufactured largely to justify the replacement of neighborhood schools by privatized charters.
“When it comes to matters of race and education in Chicago, the attack on public schools is endemic,” said CTU President Karen GJ Lewis.  “Chicago is the most segregated city in the country, and our students of color are routinely deemed as second-class by a system that does nothing but present one failed policy after the next.”

More specifically, Chicago Teachers' Union highlights what  the policy of neighborhood closings and charter openings has led to:

- Increased racial segregation
- Depletion of stable schools in black neighborhoods
- Disrespect and poor treatment of teachers
- Expansion of unnecessary testing
- Decreased opportunities for deep conceptual learning
- Increased punitive student discipline
- Increased student mobility
- Minimal educational outcomes
Locally, DC Action for Children, a non-profit advocacy organization came to a similar conclusion that educational outcomes have been minimal in the District of Columbia.  Their newly released study, DC KIDS COUNT, Third Grade Proficiency in DC: Little Progress (2007-2011) , looked at five years of third grade reading and math test scores from the DC Comprehensive Assessment System, (DC CAS) for insights about citywide proficiency, the achievement gap and neighborhood disparities.
Their results? “We could not prove any statistically significant citywide progress from 2007-2011 in reading or math proficiency. The same held true when we broke scores down by race, by DCPS schools, DC public charter schools, students from economically advantaged or students from economically disadvantaged families."
This study neutralizes the rationale used by Chancellor Henderson and her predecessor Michelle Rhee which is embedded in the first goal of the five-year plan DC Public Schools ) which is: “To improve achievement rates.”
I personally don’t believe that Henderson's under-utilization argument makes any sense. What we know is that the policy of closing schools has not saved DC Public Schools (DCPS)  any money. The evidence shows us that closing our schools has driven more parents out of our public schools to charters and elsewhere. It's a no brainer that less students in our public schools equals less money for DCPS.

DC Public Schools cannot demonstrate that their continued failed policy of closing 20 plus schools every 4 years, is not achieving its number one goal of improving test scores. So why then is Henderson and other heads of school districts stuck on stupid nationally, one might ask?

The answer lies in CTU's report, "A crisis has been manufactured to justify the replacement of neighborhood schools. There  is a real economic benefit to real estate investors, charter school operators, philanthropists and wealthy bankers."

An August 2012 Reuters article spells out the reason for the national push to privatize. " The U.S. spends more than $500 billion a year to educate kids from 5-18. The entire education sector represents 9 percent of the gross domestic product, more than energy or technology sectors. Traditionally, public education had been a tough market for private firms to break into- fraught with politics, tangled in bureaucracy..... Now investors are signaling optimism that a golden moment has arrived. They're pouring private equity and venture capital into scores of companies that aim to profit by taking over broad swaths of public education."
When the smoke clears in 2013 and all the policy arguments are made, DCPS will close another 20 schools give or take a few concessions and 12,000 students and an estimated 1,200 teachers and school staff members will be thrown under the bus.