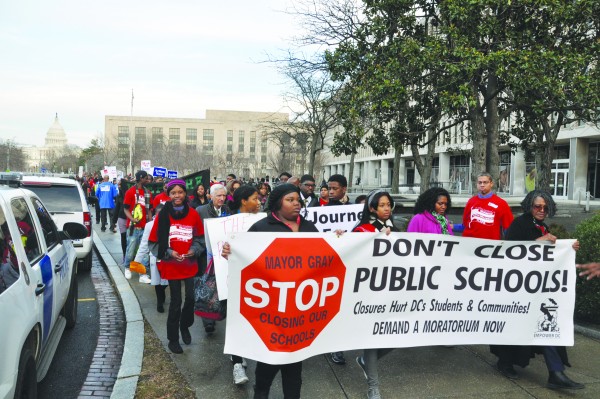 
Last week on January 29, 2013, activists arrived in Washington, DC for what has been described as a "Journey for Justice." Seventeen cities were represented including:  Atlanta, Baltimore, Boston, Chicago, Cleveland, District of Columbia, Detroit, Eupora- (Miss), Hartford, Kansas City- (Mo.), Newark, New York, L.A., New Orleans, Oakland, Philadelphia and Witchita, Ks. Among their chief demands is a call to the US Department of Education's civil rights office to end top down discriminatory closings of public schools, phase outs and turn-arounds nationally and the sabotage and disinvestment of public schools.

According to a Huffington Post article, members of the Obama administration were present for the hearings. US Secretary of Education, Arne Duncan remained for 45 minutes despite the chants of protesters demanding to know where Mr. Duncan was once he exited the hearings. Also Obama Education Advisor, Roberto Rodriguez was present.

The overarching theme of the hearings from students and parents included testimony on how the closing of minority neighborhoods displaced students of color without a neighborhood school and destabilized entire communities.
While US Secretary, Duncan proffered to hearing participants that he has no control over local school closings, Journey to Justice activists saw it differently. Their January 2013 press release sums up their beliefs this way - "Despite current research showing that closing these public schools does not improve test scores or graduation rates. Closings have continued primarily because current federal Race To The Top policy has incentivized the closing and turn around of schools by supporting privatization. However, the privatization of schools has resulted in unchecked actions and processes where the primary fallout is those low income minority communities. The devastating impact of these actions has only been tolerated because of the race and class of communities affected."

Other demands of Journey for Justice include the implementation of a sustainable community driven school improvement process as national policy. Daniel del Pielago, Education Organizer of EmpowerDC states that moving forward -  “Communities are planning national days of action and pushing for a meeting with President Obama on this issue. This movement has allowed us to see that we (individual cities) are not in this fight alone and that we will use People Power to continue to organize to bring an end to unjust/discriminatory school closures.”
Following the DOE hearings, students, parents and community activists marched down Independence Avenue with police escorts alongside of them to the Martin Luther King Jr. Memorial on the Mall chanting, "We won't take it no more, we're fired up," donning t-shirts that read "No schools + no jobs = death." I’m glad Journey for Justice came to DC, and honored to have been among the participants.