Why is Michelle Rhee Silent on the DC Cheating Scandal? 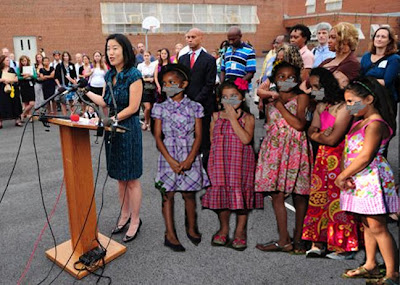 Disclaimer: I am not writing in my official capacity as WTU General Vice President, but rather as an announced candidate in the 2013 WTU elections and WTU member.
Candi Peterson

Michelle Rhee is refusing to talk to USA Today reporters about the testing cheating scandal that occurred on her watch while she was DC Public Schools Chancellor (2007-10). Hmmmm inquiring minds want to know why Ms. Rhee, with her infamous gift of gab won't open up on this topic ? The article below, which was featured in the NY Times newspaper on August 21 is a 'must read' on the latest controversy surrounding Rhee and USA Today.

By the way, someone sent me the featured photo of Rhee with students with tape over their mouths which is symbolic of the irony of this story.