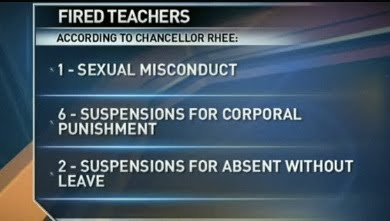 Bill Turque in his DC Schools Insider blog further examined Rhee's now infamous comments to Fast Co. magazine that she "got rid of teachers who had hit children, who had sex with children." Since it is likely that Turque's examination of this story won't make the mainstream press- I decided to post it here.

Lanier: Only 1 teacher arrested for abuse

"D.C. Police Chief Cathy L. Lanier has filled in more of the holes left by Chancellor Michelle A. Rhee in the wake of her statement to "Fast Company" magazine about the behavior of some of the 266 teachers she laid off last October.

Rhee said she "got rid of teachers who had hit children, who had had sex with children," but touched off a furor when she took four days to specify that just one had been suspended for sexual misconduct and six (later amended to five) had faced disciplinary action for administering corporal punishment to students. The Post reported on Feb. 9 that school security personnel had logged 220 allegations of corporal punishment and verbal abuse during the 2008-2009 school year.

But a relatively small number of allegations were deemed substantial enough for police investigation. Pressed by D.C. Council Chairman Vincent C. Gray for more details, Rhee reported last month that the school system had referred 68 incidents to the police between July 2007 and Feb. 5.

Lanier told WTOP's Mark Segraves Thursday that arrest warrants were issued for four teachers in connection with incidents during this period, but that only one has been arrested. Lanier did not say what happened to the case in the court system. She said that police sent another "12 or 13" cases to the U.S. Attorney's office, which decided that they were not legally sufficient for prosecution.

"A lot of times in cases like this, it's one person's word against the other. We do the best we can to investigate or sustain one side or the other," she said. "But the attorneys have to make the decision whether they can prosecute that case. Just because a warrant was submitted and declined, it doesn't give you any real conclusions."

Uh, Lanier and Rhee are both liars. MPD does not do its best to make cases. They do their best not to have to do paper work. This, however, is Lanier putting Rhee out there on her own high and dry. If there is no paper work to substantiate the allegations Rhee made then something needs to be visibly done about her lies. As usual that hole under Rhee's nose has gotten her into some mess. Let's see if anyone holds her accountable THIS TIME.

Rhee purports herself as the savior of children but she doesn't give one hoot about them. She had the chance to save some young girls from her fiancee in California and she did not.

Somebody is leaving someone high and dry to crash and burn!! Wonder who that might be? LANIER, that's who! Now she is basically calling Rhee-Rhee a liar because there's no paper work. That makes the RIF an even bigger lie!!

It's good that she's Lanier's is providing this info now, but Lanier could have done this long ago. Makes you wonder what else is going to trickle out, and when, and why.

I saw the comment on nbc4.com which is our local news website. Believe me, the mainstream knows.

Rhe-Rhe is retarded! Go fly away u witch! LOL!

Maybe there is a crack in the Three Amigos..lolI hope that people can see what is really going on here .... please see through lies people.

Teachers' best defense is a good offense, and to me that means exposing the truth. Thanks to Chairman Gray for insisting on the facts and to Bill Turque for reporting it.

The next move should be to follow the money in regard to Race to the Top funds. Who helped DC to apply for this money? How much remuneration did this person get? What organization is he or she affiliated with?

I strongly suspect big time fraud in regard to RttT money. Hopefully someone with the right skills can expose it.

The point is that Rhee can lie and defame people as long as no one does anything about it. The Council and the Mayor need to force her to suffer consequences. If they won't do their jobs perhaps the people of the District need to punish her by refusing to send their children to DCPS. Perhaps residents should support Lotto systems in other jurisdictions and boycott DC Lotto since the proceeds allegedly go to DC Schools and ...

I am glad Lanier is putting Rhee out there. While both women -- you can't say ladies -- are deplorable and as crooked as that street in San Francisco, I put my money on Lanier to be able to expose Rhee for what she is any day. Let them both eat cake, corrupt agency heads that they are.

I am with 2thru. Let's elect an all new Council, Mayor and get a new attorney general. Not one of this cast of characters can be trusted. Not one. There was at least one in Sodom and Gomorrah. What a sad commentary that is.