No Debate For You: WTU Prez Saunders Bows Out Presidential Debate Amidst Confusion

Today right before the close of the school day, WTU President Nathan Saunders had a major meltdown and sent out an email blast to WTU members titled "WTU Alerts Teachers About a "Fake Debate Scheduled for McKinley Tech High School." What caught my attention was that Saunders actually sent the first email from his own WTU email account. Followed by a second email blast (see below) minutes later from the WTU Communication Director. Saunders' email to union members stated, "This is yet another attempt by individuals to misinform and mislead our members..... The individuals who are promoting this debate have put WTU members in great jeopardy for not following WTU membership and DCPS guidelines." It was Saunders allegation that someone used the WTU logo to mislead members into thinking that the event was union sponsored. Saunders made a not so subtle threat to  members when he affirmed that WTU could not represent members who trespass on DCPS property for any event unauthorized by WTU. Saunders ended with "We hope to discover who initiated this false information, so that appropriate action can be taken."

You can't make this stuff up really. So I decided to contact Liz Davis, my running mate for the upcoming WTU Run-Off election. Davis stated in response,"No one ever represented the debate as being formerly sponsored by the WTU leadership, the election committee, or inappropriately used the WTU logo. The organizers had reached out to both candidates and thought the debate was on. It is also not true that private insurance must be posted to hold any and all meetings in school facilities. These are scare tactics are simply being used to inhibit the democratic process."

Michele Bollinger, a Wilson High School teacher who helped organize today's debate added, "I don't speak for everyone to be sure, but when I read Mr. Saunders email about the so-called fake debate- I was shocked and stunned. Personally, I read the threat of an arrest for trespassing for even showing up at McKinley. It reinforced what I already suspected about Mr. Saunders-- that the rumors of personal attacks, unjustified lawsuits, contempt for members' independent initiative were true."

I'm saddened that WTU members had to endure this kind of chaos and confusion. I do humbly apologize as a longstanding union member to the teachers from Lafayette Elementary School, McKinley Technology Senior High School and Wilson Senior High School for their well intended efforts to organize this debate. Liz Davis and I are both disappointed that in the end Mr. Saunders didn't see it as in his interest to come to the debate. We hope that in the future we can rise above political gamesmanship and make debates a regular feature of WTU elections. The members and the health of our union demand it.

Please don't forget to Vote Davis slate in the ongoing WTU Run-Off Election. WTU can be better! Ballots have been mailed. If you haven't received one, please email ALimberakis@WTULocal6.net with your name and mailing address. 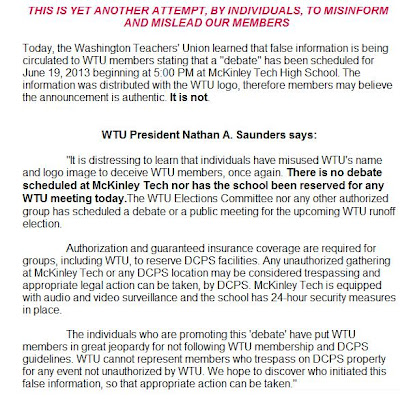 Seriously? I don't understand why we have to be put through this nonsense! We deserve a strong union that focuses on teacher issues and not movies or galas! We need a president that isn't going to steal our money, boast about himself and waste our time with this dumb stuff! We don't care what movie you are showing! We want a contract in place that is good for teachers and children! DUH!!!

Just saw the election results on the WTU page. CONGRATS, Liz and Candi!!!! *Doing a dance!*