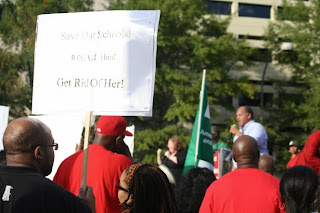 A change is a coming! Washington Teachers' Union (WTU) Hold over President Nathan A. Saunders is not ready to move out of our WTU house, at least not yet. But it will happen either voluntarily or involuntarily. I hope for the sake of his legacy, Saunders chooses the former.

Here's an article about our recent election win as written by Bhaskar Sunkara of Working In These Times.

BY BHASKAR SUNKARA
The district's push for so-called education reform has long been a sticking point for the Washington Teachers Union, as evinced by this poster criticizing officials Michelle Rhee and Adrian Fenty from a 2009 rally. The perceived capitulation of several WTU presidents to such an agenda has forced them to leave office.

This week, Washington Teachers Union (WTU) members elected a reform slate, ousting incumbent president Nathan Saunders in a run-off election.
With the vote, the WTU follows in the footsteps of the Chicago Teachers Union (CTU), which elected the insurgent Caucus of Rank and File Educators (CORE), led by Karen Lewis, in 2010. Like CORE, the DC reformers promise to resist school closures, privatization efforts, and the proliferation of high-stakes testing.
The WTU certified the results Monday night, with Elizabeth A. Davis winning 459 votes to Saunders’ 380.
Davis’ running mate, Candi Peterson, spoke to In These Times by phone this morning. This is Peterson’s second time assuming the office of WTU’s General Vice President, after being elected on a reform ticket with Saunders in 2010. In that campaign, Saunders and Peterson accused the incumbent WTU President George Parker of running a business union and critiqued his allegiance to American Federation of Teachers (AFT) President Randi Weingarten, who had encouraged the union to accept an unpopular contract—which included the implementation of IMPACT, a teacher evaluation system —supported by then-school chancellor Michelle Rhee and mayor Adrian Fenty.
Reflecting on her first stint as general vice president—she was dismissed by Saunders in 2011—Peterson says, “Saunders didn’t share my vision of what a participatory union looks like.” She paints a picture of a union that was run by one man and failed to sufficiently engage members to advocate for their own rights. This time, Peterson hopes, will be different; she and new president Elizabeth A. Davis promise more rank-and-file participation.
On certain substantive issues, the camps are not too far apart. Saunders remained hostile to many aspects of the corporate reform efforts, but it wasn’t enough to appease members. Speaking to the Washington Post, he said, “They want more aggressive change than what I was dishing out.”
That isn’t to say the former president’s tenure wasn’t filled with fireworks. Though Peterson was directly elected as general vice president in 2010, she was removed by Saunders the next year without any recall procedure, which violates union guidelines. She won in arbitration in September, but was not reinstated afterwards to serve the duration of her original term. Even now, she’s having trouble assuming office. The WTU constitution allows for no lame duck period, and when Saunders was elected in late November 2010, he took control of the union the next day. Yet Peterson and others in the reform slate were denied entry to the office yesterday. Peterson described the transference of power as a “hostile situation,” but while Saunders declined to comment, a staffer within his camp told In These Times that he believes the old leadership would not vacate until the end of the month.
The nationwide push to standardize, privatize and shut down public schools has sparked an opposition movement both inside and outside teachers unions. Though media attention has focused on the actions of teachers and students in Chicago and New York, fronts have been opened in places like Newark and Washington, as well. In Newark, facing challenge from reformers local President Joseph Del Grosso was elected by a margin of just nine votes last Tuesday. The challengers, like the Washington teachers, were openly inspired by the example of CORE, and still won a majority of executive board seats.
As has become common in American union elections, only 1,200 of 3,000 Newark Teachers Union members cast ballots, but the showing against a long-time incumbent surprised many. The result there, like the one in Washington, will cause some alarm for Weingarten and her team. Not unlike tactics used years ago in Washington, the AFT leadership had recently mobilized national organizers in Newark to promote a contract that won the acceptance of New Jersey Governor Chris Christie and Newark Mayor Cory Booker.
The results in Newark and DC, long laboratories of neoliberal education reform, represent part of a grassroots backlash to these kinds of policies. It remains to be seen, however, whether these local efforts will be enough to stop what has long been a national push to redefine public education along corporate lines.
Posted by Candi Peterson at 12:36:00 AM

Tell Nathan to get off of his huge rusty dusty and let the new leadership assume their positions. It's really sad that he is resisting his move from office.

The membership has spoken, Nathan. GET OUT!!! Your services are no longer needed -- or wanted!

I really wish he would just get out of the office. I don't trust him. For all we know, he is finishing up "something that was in the works" in order for Kaya and her team to get their way. We really need to put in the by laws something that outlines the President's power being terminated immediately after the election and given at at most 7 days to vacate the office.

Congratulations Candy and Liz from a fellow social worker.

During this transition period let us be kind and NOT do onto others as they have done to us. Our union needs to heal and move forward in an enlightened spirit. There have been so many distractions, a President that embezzled funds; George Parkers tenure and so on. Now give Nathan time to wrap his head around his defeat and allow him to move on with dignity.

The best way to assume your well-deserved positions is to demonstrate to others your compassion. Candi and Liz you both won because enough people know that the two of you have stood up for teachers, counselors and related service providers at your own peril and you have been rewarded for caring and not being afraid to speak up. Honestly I do not have that kind of courage. I think the both of you are very courageous

I voted for the two of you and I am counting on the two of you to work hard to repair the negative damage that has been done to our Union over the years.

Best of luck and stay positive and spiritually grounded.

Dear LICSW
Thank you for your support. I agree with your comments that our union needs to heal so we can move forward.

Candi.... You and Liz don't need to be in an "office" to get started on repairing this broken union! Set up camp in your living room and get started there! We are all behind you and if Nathan can't accept defeat and wants to sit in his office chair for the next few weeks, let him! We don't need the walls of any office to show DCPS we mean business now! Take control Candi and Liz....in or out of those office walls!

Thanks Jennifer Miller for your comments. We are doing just that working outside of the WTU office for now.

I do have a question for you Candi.... What will happen to the contract that was negotiated between Nathan and Kaya? They said we should expect to see it in a week or so but no one that I have talked to has received anything! Should we still count on that arriving in our mail?

Nothing but the truth!

Jennifer Miller
Those are the types of things we are trying to sort out doing this transition period unfortunately there have been roadblocks by Saunders.

I read in the former Presidents WTU election campaign literature said that a contract could be delivered within 60 days. I don't know if that statement was true or if it was part of the campaign hype. Our administration promises transparency. Stay tuned...

Oh wow! This just gets crazier and crazier! He told us on his last robo call that all negotiations were done and the contract was being sent out! Please Candi.... Don't get caught up like he did with his position and title! Work for us and make decisions based on what is best for teachers!

Do u really think a contract is on the way? Keep dreaming. I do not believe Liz and Candi will sign off on a contract they campaigned against. If anything prepare yourself for another round of talks and battles.

Why must all your comments be approved by you. Every opinion should be posted unless they are x-rated. All opinions should be given on your blog, not just the ones that reflect well on your views.

So, now Nathan is appealing the election results? WTH is going on?! Is this why he pushed to have his wife on the elections committee? What a sore loser. Time for him to move on and move out so that our newly elected administration can get down to business. This is ridiculous!

How long is this going to drag out, Candi, and what role, if any, does the AFT have in this mess?

An appeal????? Please Nathan!!!!! Just get your belongings and get out!

First of all, CONGRATS!! My question is why did I get an email from WTU stating that the election is being appealed for the results to be set aside? How can the Election Committee overturn an election that was previously called valid?? I know that someone is trying to hold on to their office, but this is a bit hinky!! We need our union to work for us, not for the best interest of the losing party. Any thoughts or insights??

Anonymous @ 4 AM I'm sorry we have to agree to disagree on comment moderation. I get everything from people using profanity, name calling, inappropriate messages,and personal hate mail which I refuse to approve. I have posted comments that disagree with my opinion sorry you've missed it.

Anonymous @ 524
No comments at this time, but stay tuned.


What is going on?

Anonymous at 3:58, I was wondering because Nathan said it was ready to be voted on and in the mail! He obviously used that to try and get us to vote for him! He did email me back yesterday to tell me that "No Contract has been mailed!" Ugh!
So yes 3:58.... There will be more to come! But... I trust that Candi and Liz won't mess around as long as the last two union Presidents did with our contract! They know how important it is to us!!!!!!! We don't care what movie is playing or what gala is coming up! We want our contract in place!

Didn't you get Nathan's email to members? He said there will be no change in officers It's nothing graceful about this dude. He won't leave without a fight. I hope Candi gives him a dose of his own medicine.

Payback is a mutha.