The Dwindling Black Educator and the Death of Transparency in DC 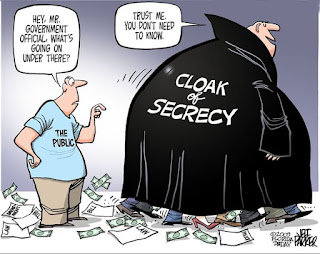 Think back and try to remember all the teachers that left the District’s public school system since the era of former Chancellor Michelle Rhee and beyond? (2008-2015)

How many of those teachers were African-American?

Unfortunately, we can’t answer those questions because we don’t have hard data, mainly because the District fails to provide data on the number of teachers hired, separated, resigning, and retiring by race, age, gender, school and years of service on a yearly basis.

Simply put, government officials in DC do not have the authority to refuse to honor Freedom of Information Act (FOIA) requests. When I chaired a WTU Data committee, we attempted to get information about teacher terminations through a FOIA request, as well as through other internal channels. We requested information be released by common identifiers but the information we received was heavily redacted and of little practical use.

Either approve or deny the request. The practice of keeping information out of the hands of the public is government’s way of covering its tracks.

Albert Shanker Institute researchers encountered similar challenges when preparing their national Teacher Diversity report. “Despite intensive efforts over the past 1 ½ years, we have been unable to procure teacher-level data for the District and charter schools in Washington, DC. We were therefore forced to draw data from a sample provided by the U.S. Department of Education’s (DOE) Schools and Staffing Survey,” as quoted by Shanker researchers.

University of Pennsylvania Professor Richard Ingersoll, recently spoke about the Shanker diversity report to an audience at the National Press club gathering in DC. Ingersoll said the rate of minority teachers ballooned from 1980-2008 and doubled that of non-minority teachers, before the recession.

Since 2008 and post recession, Ingersoll reports that minority teacher rates across the US declined tremendously due to layoffs and “high quit” rates of minority teachers due to job dissatisfaction around poor working conditions in the mostly urban schools where they teach. Other factors cited for lower minority teacher hiring are budget cuts, new charter school openings, and shifting of resources from public schools to charter schools.

Due to a lack of data from DC, Shanker researchers were forced to draw data from the small sample surveys from Department of Education. Based on these surveys, African American teachers decreased from 77% to 49% while white teachers more than doubled in size from 16% to 39% between 2003 and 2008 in DC. Hispanic teachers increased moderately. In contrast by 2022, non-white students are projected to make up 54% of public school attendance, according to the Department of Education.

The Diversity report noted that black teachers declined as a proportion of all the cities teacher workforce they examined but the shrinkage in black teachers in Washington, DC was described as “alarming”. I suspect if we had data available beyond 2012, the numbers of black teachers exiting our school system may be even greater.

“We just had no idea the extent of it. What’s clear from this data is over the last 10 years or so with the recession, if you look at every one of these cities, there’s a loss of teachers—but African Americans are bearing a hugely disproportionate share of the loss,” Leo Casey, executive director of the Shanker Institute told The Washington Post. The number of black teachers in the workforce declined, in varying rates of severity—from roughly 1 percent in Boston’s charter sector and Cleveland’s district sector, to more than 24 percent in both New Orleans sectors and nearly 28 percent in Washington, D.C’s charters and districts.”

The lack of teacher diversity has been addressed as a national epidemic by education scholars. Among the educational analysts studying this problem is Dr. Leslie Fenwick, Dean of the Howard School of Education. Dr. Fenwick sees the elimination of black teachers from the classroom as not only an economic loss for those educators but a disservice to their students and a detriment for the teaching profession as well.

Studies in the late 80’s and ’90s, found that teachers of color can boost the self-worth of their minority students, partly by exposing them to professionals who look like them. The benefits of keeping teachers of color in the classroom extend far beyond role models.

Research has also shown that students perform better academically and graduate at higher graduation rates, and stay in school when they have teachers who come from the same backgrounds as they do. White students benefit, too. Early interactions with teachers of color can help dispel damaging stereotypes about different ethnic groups.

The question is what can be done to stop high attrition rates of black teachers?  The Shanker Institute study suggests there should be more programs at the state and local level to help minority teachers stay in the classroom.

At DC's New Teacher Orientation (NTO) this school year, I had a conversation with a central office staffer who confirmed my hunch that more teachers of color, more male teachers and more veterans had been hired this school year. Certainly, that’s progress from where I sit but there still there is a lot more to be done.

Simply setting goals to hire more teachers of color is a simplistic solution to a complex problem. If we are really serious about attracting minority teachers to our school district, we are going to have to be willing to examine the reasons these teachers leave, get forced out and what we need to address to retain them. If we are not willing to be honest- it will be impossible to make things better.

One of the major reasons that DC is taking steps to recruit more seasoned Black teachers is likely due to the breakdown in classroom discipline as the recent wave of Teach For America teachers from suburban and mid-western backgrounds are failing to understand the cultural complexities of teaching and communicating with urban youth. New teachers also don't receive the much needed mentoring they need to be successful.

Not to mention, the results from the independent evaluation of DC public schools which shows that student gains still remain acceptably low and more than 50% of students of color, English language learners and students with disabilities remain less than proficient despite the purging of many of our veteran teachers.

The perverse cycle of "teacher churn" has come full cycle in the District as DC's Human Capital Team are beginning to realize the value of “culturally appropriate” relationships and classroom role models as they ramp up their efforts to recruit more seasoned veteran black teachers.

Yet at the same time the District government resists the demand from parents, school activists and the public to be more transparent as the demographics of Washington, DC's  under-performing schools stay persistently black and charter operators continue to cherry pick students and diversify the teacher workforce as the Bowser administration continues to pay lip service to transparency.

You know I am a fan!

"Think back and try to remember all the teachers that left the District’s public school system since the era of former Chancellor Michelle Rhee and beyond? (2008-2015)" -- I am one.

"How many of those teachers were African-American?" -- I am not, however I fully agree with you.

To make matters worse, if you are African-American and teach "Special" classes like Art, Music & PE, or Special Ed., chances are even greater that your job will evaporate and be outsourced to a private "public" charter school.

But wait, if so-called education reformers call what they're doing "the civil rights movement of our time," then why are Black teachers being systematically purged from the urban public schools, often replaced by privileged, patronizing, insufferably arrogant TFA colonizers?

I do not know much about those other cities, but I remember the day when the Washington Post published the salaries of DCPS teachers & staff during the Michelle Rhee era. That was her first strategy. Even though the salaries were wrong (at least mine was), the entire country got the perception that these "black women" in DC were making too much money! Then the sword came swiftly. Even to this day, the powers that be are doing everything in their power to get rid of DCPS teachers and service providers. Even the ones who are highly effective, highly educated and making a difference with children. One friend/colleague of mine told me that one day over the summer she received her highly effective email indicating that she would get the merit pay. Two days later, she received her termination letter because the powers that be were getting rid of certain service providers. Now the school is lacking quality services because she was let go. She was highly effective everyone! What sense does that make? Is that business? Is that putting children first? No, that is making sure that the lovely demographics graph looks significantly different in the future.

This blog is simply awesome. I should follow to develop my writing skill. Thank u Jane.

I'm a Black American teacher who has had so many doors slammed in my face...now I'm "doing time" as an assistant changing diapers in preK. I've invested so much blood, sweat, sacrifice, and money into my education, but it appears that Arlington wants Black employees out of general ed. and esol/hilt classrooms, and occupied only with spED services. This situation "screams" discrimination! We are forced to endure a Cutural Awareness workshop which does not even touch on the topic pertaining to what we are really teaching the children when they see all white teachers in front of the class (mostly in their twenties) and all Black and Latino assistants (or cleaning staff) as role models. There's nothing wrong with being an assistant, but the diversity in staffing is obviously biased. I am positive that this effects the children psychologically; it is corrupt, damaging, and in many cases, irreversible. I ask myself, "what kind of legacy am I going to leave behind, and how do I explain to my own children that hard work and determination are key to reaching your goals??"
Sincerely,
"Hanging in There"