Rhee On Her Soap-Box Again, Shame On Anderson Cooper ! 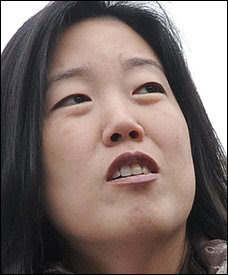 Much to my own discomfort, I forced myself to watch a clip of Anderson Cooper 360. Gag me with a spoon. Here's the video clip link. Just more of the same of Rhee on her soap box with unedited teacher bashing . Many who watched Michelle Rhee on Cooper's Thursday evening show were infuriated about the production of 'What's Next -Education ?' If you were watching, the answer to that question is more of the same. Stay tuned for more firings, more firings and more firings by Chancellor Michelle Rhee . It brings to mind Bill Turque's recent article in which he reported that Rhee vowed not to make teacher cuts despite a budget deficit that extends into 20011. Seems as though the WaPo had to offer a retraction to this mis- characterization as this isn't exactly what Rhee meant. The word 'vow' afterall just isn't in Rhee's vocabulary and gives us a hint of what's up ahead. So don't be surprised if DC teachers are amongst the group to get the axe along with security and central office staff in the upcoming RIF's.
The perpetual theme of Rhee's argument on and off the show seems to continue to be that ineffective teachers are to blame for all that's wrong in urban education. Of course the show infers that ineffective teachers are typically older teachers who stay beyond their time. Even the first snap shop is an adolescent student complaining about older teachers with connections. Bah humbug ! Most students I know consider all of their teachers old even when their teachers are only 26. Seems like this snapshot was intentionally staged by Cooper's producers unfortunately.
What ate at me most is this reference to teachers as 'human capital' as though teachers are something to be disposed of. Rhee's remarks lacked substance and had she been required to be a part of an educational panel, she would have been kicked to the curb quickly by anyone with a miniscule of knowledge about public education. Even a young student featured in a clip recognized the importance of having technology to enhance learning. Rhee quickly dismissed this yet when asked by Cooper what 3 things she neeed most, she commented among them, her email and prized laptop.
Of course the show's producers allowed Rhee time to give a shout out to her boss, Mayor Adrian Fenty and put in a good word especially given that this is an election year. What was noticeably absent was any questioning about accountability for Rhee and her management team. It left me wondering where's the accountability for this 6 figure salaried crew or are teachers the only ones responsible for the state of public education ?
Far be it from me to be the only one to criticize this mediocre 2 year teacher by her own admission known as Michelle Rhee. Here's what others are stating about Rhee's appearance on Cooper 360 as recently featured on Council member Kwame Brown's blog :
Crystal Proctor says:
January 8, 2010

Up until today I had been a fan of Anderson Cooper but now I must add him to the list of people that don’t really care about education and our kids, these people only care about allowing Michelle Rhee to push her agenda. This is the agenda that efavorite and The Washington Teacher touched on.

I am so tired of watching Michelle Rhee bash teachers. I must agree with efavorite, her whole interview was to talk about teachers and how bad they are and how unions will make the world crumble. I am a teacher that Michelle Rhee wrongfully terminated in October and I am tired. I am tired of defendeing myself in the Post, on blogs, and on the street. It continues to shock me how people believe her lies. Despite being told that I was being fired because of a budget shortfall she continues to hire. Despite her admiting under oath, in front of the City Council, that she found out about the budget in July and stoped hiring shortly thereafter, there is proof on the DC Government website that proves otherwise. I am really tired of people of power looking the other way. She is winning her war against teachers and the students are loosing. Mr. Brown what will you do!!!

Absolutely right on time. I agree wholeheartedly. Does anyone have the contact information to Anderson Cooper and company? We all need to contact them asap. Bravo Candi!

Candi - please be sure to send this stright to Anderson Cooper. If he has any remaining interesting in reporting actual news, he will take notice.

Since some teachers are paid out of the central office budget, some believe that teachers paid out of this budget will be laid off. Amazing, it really is.

that is the link that you can go to to post comments on the story on Anderson Cooper 360, he is also on facebook http://www.facebook.com/AC360
you can make comments there as well.
He is also on Twitter @andersoncooper

Thanks Classic for that comment. I did make a comment on his blog but am awaiting comment moderation. I note in his list of rules that one must use a real name if they expect to be approved. Please check out the rules so your comment can see the light of day.

"Ole Girl" Kaya Henderson used the term "human capital" today @ the training for Saturday Scholars. What exactly does that mean? I've heard what the perception is and I must agree. Thanks Candi

I agree, Michelle Rhee was just blowing smoke up Anderson Cooper's rear end. She's just trying to find a new job, because her current gig will be up very soon
(September, DC primaries). Maybe with a new mayor for DC we can finally get a real superintendent (I miss Dr. Clifford Janey)that has experience, people skills, and plain old-fashion respect for teachers. No one asks an older doctor, lawyer, or preacher to leave their chosen profession because they are over 40.

I would be interested in hearing what other people think the meaning of human capital means ?

Here are some web definitions of Human Capital - they don’t sound very warm and fuzzy, do they?

The stock of skills and knowledge embodied in the ability to perform labor so as to produce economic value.

The personal attributes of an individual that are valuable in an economic context.
The health, strength, education, training, and skills that people bring to their jobs.

The accumulated skill, knowledge and expertise of workers

The stock of knowledge and skill, embodied in an individual as a result of education, training, and experience, that makes him or her more productive.

Human assets consisting of items such as skilled workers.